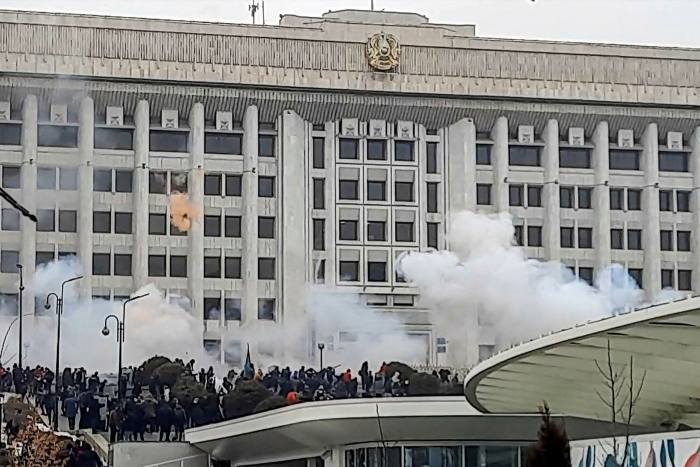 Aset Abishev was one of the first protesters to take to the streets in Almaty, Kazakhstan’s largest city, last week and one of the first to be arrested. After four days in detention, he woke up covered in bruises that he said were the result of torture and beatings.

“The police department, all five floors, was kind of a torture transporter. Screams could be heard from all the windows,” the veteran opposition activist alleged. “The torture was horrible. They put bags on the young people and strangled them. They beat people, jumped on those who were lying on the ground.

“They were ordinary citizens who were caught on the street, bystanders, taxi drivers,” he added.

The largest and most violent protests in Kazakhstan’s history broke out earlier this month in the western city of Zhanaozen over rising fuel prices.

By the time they were quelled nearly a week later, the demonstrations had spread across the country and turned into broader protests over poverty, corruption and the influence of former leader Nursultan Nazarbayev. The unrest prompted the government to resign and President Kassym-Jomart Tokayev to ask Russian-led forces from former Soviet states for help.

Government buildings were set on fire, and the president ordered security forces to fire “without warning.” More than 160 people were killed, including policemen. According to previous official estimates, more than 10,000 people had been arrested, although on Friday the president said 2,000 had been detained.

Tomiris Izgutdinova, a 20-year-old student from Almaty, did not join the protests. But her mother, Nuraliya Aytkulova, was shot on her way to her daughter’s house. Shot twice in the chest, she was found bruised and battered in the city’s Republic Square, Izgutdinova said. It is unclear who fired the shots that killed her.

“Only this vile government is to blame,” Aytkulova’s brother Nuraybek said. “It has to change. What is happening is terrible. They are changing places in government, while ordinary people can barely get by. And when they speak, they are crushed and literally mixed with earth, just like Nuraliya’s body was.”

Government officials did not respond to requests for comment on the allegations of violence. On Friday, Tokayev said in Twitter: “Those who have committed serious crimes will be punished in accordance with the law.”

Addressing parliament earlier this week, Tokayev blamed Nazarbayev for creating an oligarchic state that had enriched a small group and left millions of ordinary Kazakhs struggling to make ends meet. The president reversed some fuel price increases and promised wage increases and a social fund, paid for by the wealthy, to address grievances.

But as the restoration of the internet, shut down across the country for much of the past week, revealed the scale of bloodshed overseen by Tokayev, public sentiment turned against him, according to political analysts and activists.

“We only had one demand: to change the regime in power. People are tired of not having citizen rights, of the constant disrespect for human rights,” he said.

However, Zhanay and other protesters told the Financial Times that they had been joined by groups of local Islamist instigators and radicals with unclear motives. Groups of “very young men in civilian clothes” were distributing weapons, he said.

Then, he added, a seemingly random mess broke out, with no obvious goal. “People were being killed and there was no police, no security services. Right in front of me, there were grandmothers and grandfathers lying on the ground.”

The president earlier this week alleged that Almaty was besieged by “20,000 terrorists” and blamed activists and the liberal media for “colluding” with them.

Darkhan Umirbekov, a reporter for Radio Free Europe/Radio Liberty in the capital Nur-Sultan, said he was detained and questioned for several hours after filming the first protests. He said that the police also came to the door of his colleague Makhambet Abzhan, who, according to him, disappeared shortly after.

“I too am sitting on my suitcase like it’s 1937, waiting for them to come get me,” Zhanay said, referring to the period of Stalinist repression in the Soviet era.

Activists told the FT that the ongoing brutality was raising public anger, with people criticizing what they saw as only cosmetic changes to the government since Nazarbayev stepped down in 2019.

Despite his arrest, Abishev said he was determined to live “in more fighting.” He has recently served a three-year prison sentence after the government designated the opposition movement of which he is a part, Kazakhstan Democratic Election, as an extremist organization. the European Parliament he has referred to it as a peaceful movement.

The organization is run outside of France by Mukhtar Ablyazov, a former Kazakh banker and government official who fell out with Nazarbayev and fled into exile after the government confiscated his assets and accused him of fraud. He has denied the accusations, claiming they were politically motivated.

“What we have seen is not some kind of senseless Russian rebellion,” Ablyazov told the FT. “Mass frustration and hatred have led to what you are seeing. . . To be continue”.

Meanwhile, activists have said that Kazakhstan’s security forces were going door to door, questioning people and checking their phones.

Almaty resident Liaylim Abildayeva said she was nursing her three-month-old daughter when 10 people in balaclavas broke into her apartment and beat her husband in front of her and two other children. They then took him away, claiming he looked like someone who distributed weapons during the protests, he said.

“It is nothing but a horrible mistake. The children and I will suffer lifelong trauma,” he added. “He can be detained for a long time, he is the only breadwinner in the family.”

The first protests erupt in the western city of Zhanaozen, sparked by the government’s decision to lift maximum prices for liquefied petroleum gas, which is widely used as a fuel for cars in the region. Demonstrations are peaceful, without arrests.

The protests spread to Kazakhstan’s largest city, Almaty. The focus is transformed to reflect social discontent rooted in inequality and poverty. The protesters also demanded the removal of former President Nursultan Nazarbayev from his post as head of the Security Council. The protests turn violent and eight police officers are reportedly killed. Hundreds are arrested and the Internet is shut down.

Violence escalates and President Kassym-Jomart Tokayev declares a state of emergency. Tokayev accepts the resignation of his government and assumes the Security Council. It appeals to the Russian-led Collective Security Treaty Organization, a military alliance of former Soviet states, for help in quelling the protests.

Tokayev issues a “shoot to kill without warning” notice to security forces. Thousands are arrested and 26 protesters and 18 policemen are reportedly killed. Internet is partially restored.

An uneasy calm is restored. Some 164 people were reportedly killed and thousands arrested during the riots. Karim Massimov, an ally of Nazarbayev, is fired as head of security and arrested on charges of treason.