The true malice of the palace 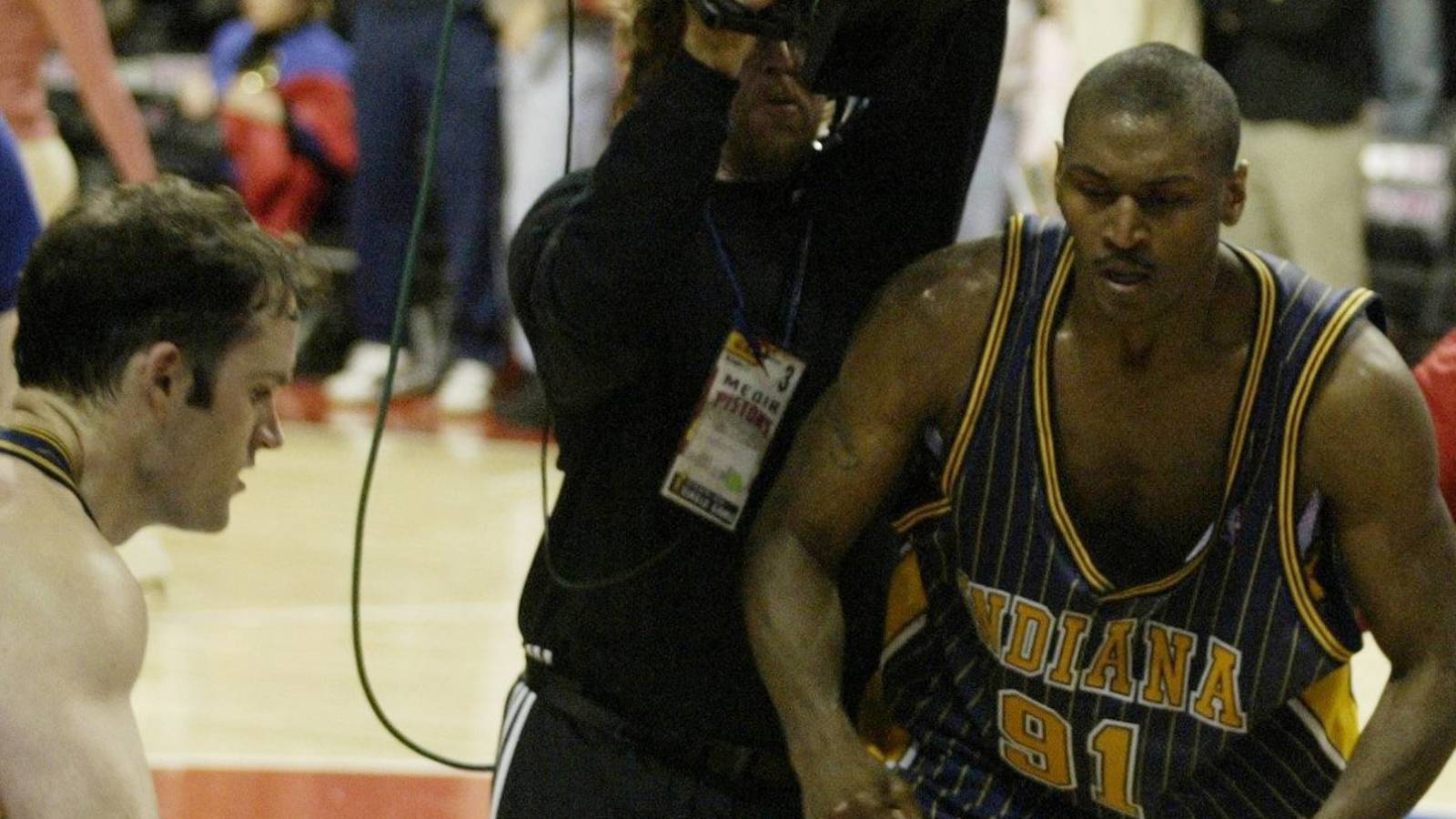 The new Netflix documentary on “The Malice at The Palace” is now airing, and it’s a lot of things. Most effectively, though, it’s a window into the 2004 version of the NBA: a revival, a reminder of a part of the league’s spirit of the age according to HBO and The Ringer’s new Woodstock 99 documentary. Here we are again, marinating at the turn of the 20th to the 21st century, wondering what went wrong; If something can be said to have gone wrong in a significant way, that is. Tonally speaking, the documentary, like the one from the infamous music festival, suggests that something rotted badly, and so much so that the smell of the transgression of the moment still lingers on our noses today.

On a driving dread soundtrack, we are introduced to Jermaine O’Neal, Ron Artest and Reggie Miller. They show us baggy uniforms, T-shirts and jeans that the music makes us believe are ominous omens. We are reminded that a match in the Eastern Conference Finals ended with a score of 69 to 65. This, contrary to what anyone can tell you, was something exciting. The logical end point of the mud of the era, which will soon find its way into the three-point madness of the current game, was the growing rivalry between the Indiana Pacers and the Detroit Pistons. Who, their matchups asked, could come out of a brutal basketball tunnel still alive?

It would be remiss to rush the setup. Let’s remember some more important details. Artest had just changed his jersey number from 23 to 91, perhaps trying to say something about an archetype change in his game, or, less generously, about what famous and fearless gamer behavior he was about to not only emulate, but also superior. Jamaal Tinsley had the biggest shorts on this side of TJ Ford. Journeyman Lindsey Hunter was there, acting as the bridge between the Bad Boy Pistons of yesteryear and whatever you’d like to call the iconic 2004 NBA defending champions. Rick Carlisle was coaching the Pacers, working closely with the guru of the The team’s top office, Larry Bird, who continued to trade the nostalgic mainstays of the ’90s Pacers for young, increasingly athletic players to clinch a championship for the 39-year-old Miller before retiring. .

Then of course the thing happened. Know what it is. It began with a disagreement on the label, similar to what is seen in baseball every time a batter is given the green light for a 3-0 pitch in a blowout. Until late on the road, Artest fouled Ben Wallace too hard. The game had gone too far, too stripped of its gravity for something like that, was the gap in manners in question here. Wallace, as Wallace does, stepped away. Before you know it, Carlisle’s tie is flailing frantically, trying to stop the pack; I’d seen a lot worse, and on a regular basis, for the record, as a member of the Boston Celtics of the ’80s. None of this was out of the ordinary.

But something extraordinary followed, flying from the stands: a thrown beer. From the seats to the court, a liquid tool created in a tense moment with the purpose of piercing the veil between the audience and the artist, and interrogating the invisible substance between them. (It was, it must be said, a spectacular launch that landed the drink on Artest’s head as he placed him on the scorer’s table, marvelous in his arc and accuracy.) What was immediately discovered was nothing surprising: Artest, along with the rest of the heated athletes, are not people someone not physically cut out for professional sports at the highest level should want to deal with opposition.

The following developments were, to say the least, bad. The danger the Pacers and their staff instantly faced from an arena full of losers with a sudden license to attack was serious – look at the old raw footage from the broadcast and you’ll see it clearly, as did the commentators working on that game. : The crowd, none of the players, was the scariest thing in that building. As O’Neal is dragged off the court, he is drenched in soda and topped with popcorn. It certainly could have been worse.

The media cycle that followed did not correlate with this or any reality, apart from the magic that racists are always fabricating on the fly, one that at this point gave Hip Hop a comically undue level of responsibility, and which featured the makeshift placeholder. for the n-word for “bully”, used generously as a stigmatic mark. Unfortunate things, to put it lightly, but hardly unpredictable. The NBA has always existed on soft terms with much of the public, with the perfection of the corporate brand and the accomplished charisma of Michael Jordan guiding an era of high prices and attention that stands as the exception for most Americans.

As that period ended and the sport struggled to maintain a similar cultural magnetism, many were already looking for something like this to protest the game. The NBA had its own terrible 2004 ecosystem of expert fanatics, eager to lash out at various characters and make hugely profitable, unsubstantiated claims, but in this case, the sport was subject to exponentially poisonous rhetoric from the economy’s worst talking heads. infotainment in general. as sport was returned to what many believe to be its proper place by the vile and criminal voices of the cable news and networks; and by the clumsiest columnists, and by the dumbest and bad faith fanatics imaginable.

We could call that something that went wrong: the occasion when the terrifying musical score of the documentary was teasing us. Or we can see it as something that is already wrong, refocused. The resurgent fragility of America’s racial imagination became, and to some extent still is, what the league would do its best to please, even if the related demographic were determined to move further and further out of its reach, so much so that at some point they were content to burn their own $ 150 T-shirts, once brought to a point where they must, for 30 seconds, question how people have historically been treated within their country’s borders. The forceful statement of that thoughtful and hateful thought should always be remembered as The Malice that was unleashed at The Palace.