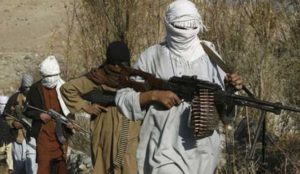 The “marked intensification of the ‘Talibanization’ of Pakistan…reached a crisis and a turning point in early December 1998,” wrote the head of the House Task Force on Terrorism and Unconventional Warfare. Yosef Bodansky in 1999. His book, Bin Laden: The man who declared war on the United States, documented the recurrent destabilizing dominance of Islamic politics in Pakistan.

Bodansky defined this “‘Talibanization’ of Pakistan” as the “transformation of the state and society into the type of hardline ultra-conservative regime run by the Taliban in Afghanistan”. This process

has been in progress since the late summer of 1998. Faced with intractable social, political and economic crises that threatened the very existence of Pakistan, the Prime Minister nawaz sharif it tried to compensate by adopting a strict version of Sharia as the country’s legal system.

In mid-September, Islamabad argued that Islamization offered the only chance to hold Pakistan together as it slid toward political and social collapse amid the technical bankruptcy and growing political assertiveness of local Islamist parties. Relying on their powerful militias and allied terrorist organizations in Kashmir, the Islamist parties demonstrated their political strength that Nawaz Sharif could no longer face. By the end of the month, the Pakistani government was hanging by a thread and the crisis was exacerbated by economic disaster and the collapse of the social order that brought the country to the brink of civil war. Islamist members of the military and the ISI high command warned Nawaz Sharif that the only alternative to chaos was to implement “Talibanization,” the transformation of Pakistan from a formally secular pseudo-democracy into an outright extremist Islamic theocracy.

National Assembly of Pakistan voted 151-16 of October 9, 1998, for what Bodansky described as a “constitutional amendment that formalizes the Talibanization of Pakistan,” specifically through the implementation of Islamic sharia law. What guardian journalist jon boone wrote in 2013, “Sharif attempted to turn Pakistan into an Islamic caliphate governed by Sharia law.” However the bill died in Pakistan’s upper house, the Senate, where Sharif’s Pakistan Muslim League-Nawaz (PML-N) was in the minority, after the Senate refused to vote on the amendment. This qualified Bodansky’s claim that Pakistan had become “formally an Islamist theocracy committed to the spread of militant Islam.”

However, Sharif had other ways to promote the Islamization of Pakistan, such as magnifying long term trends at military and Interservice Intelligence (ISI). As Bodansky pointed out,

Sharif orchestrated a deep purge of the entire ISI and military high command, expelling the Westernized elite and replacing them with Islamists who are ardent supporters of bellicosity towards India, active support for the proxy war in Kashmir, and assistance to the Muslims. Taliban in Afghanistan. and other Islamist jihads.

Sharif’s promotion of sharia preceded his 1997-1998 term as prime minister. During his first administration in 1990-1993 as chief executive of Pakistan, he introduced the 1991 Implementation of the Shariat bill, which both legislatures of Pakistan approved by a simple majority. As a Pakistani journalist M. Ziauddin He pointed out that this “Law sought the interpretation of all laws in the light of Shariah and also sought the creation of commissions for the Islamization of educational and economic systems and the media.”

As finance minister and then prime minister in Pakistan’s Punjab state in the 1980s, Sharif had previously accepted the campaign of Islamization under military dictator General Muhammad Zia ul Haq (1977-1988). Like Pakistani journalist Khaled Ahmed wrote:

When the ideology hardened under the pious military ruler, General Zia, Nawaz Sharif was with him, following the example set by him and did not oppose when the laws against blasphemy and desecration of the Koran were passed and even made more draconian . The Zakat tax intended to be spent on the poor cannot be spent on non-Muslims who are among the poorest communities in Pakistan. Muslims who are born in Christian hospitals and study in English-medium schools funded by Christian charity don’t care if Muslim charity doesn’t help poor Christians.

Another Pakistani general, pervez musharraf, overthrew Sharif in 1999, which caused his exile in Saudi Arabia in the years 2000-2007. When he returned to Pakistan, he re-entered politics, becoming prime minister for an unprecedented third term in 2013-2017. At the time of his election, Boone noted, “old enemies and old friends say Sharif is a different man.” “A former enemy said that the years he lived in exile in Saudi Arabia had partly cured Sharif of any enthusiasm he may once have had for giving religion an even greater role in national affairs,” the journalist explained. .

Boone noted why some

They argue that the 63-year-old leader of the Pakistan Muslim League-Nawaz (PML-N) is best equipped to deal with a daunting inbox, including a failing economy, chronic power shortages and an ever-increasing tide. major extremism. Sharif got full marks for refusing to conspire with the army to overthrow the last government, something of a tradition in a country that has seen three episodes of military rule. Instead he opted to allow the shaky PPP-led coalition [Pakistan People’s Party] become the first elected government to complete a full five-year term.

Given Pakistan’s overwhelming problems, small changes of heart in leaders like Sharif are small consolation. Furthermore, support for Islamization in Pakistan extends far beyond a few political figures, as will be discussed in the next article in this series.