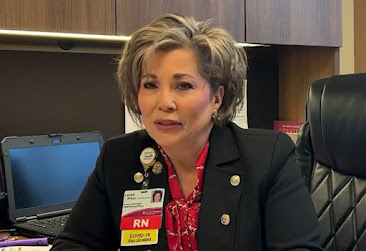 Gov. Andy Beshear previewed the health portion of his budget plan Wednesday, with new money for nursing homes, retention and hiring of nurses, along with funding for hunger and mental health for the elderly.

Beshear will give his budget address on Thursday, January 13 at 7pm ET. your own version of the budget Friday.

The legislature makes the final decisions on the budget. The Democratic governor can remove veto line items, but Republicans can override it with simple majorities in the House and Senate.

Nursing Home Relief: Both plans would continue to pay nursing homes the additional $ 29 per day they have been receiving for each of their Medicaid patients during the pandemic.

The money comes mainly from the federal Centers for Medicare & Medicaid Services. The normal federal match rate for Medicaid is 72%, but it has increased by 6.2% during the pandemic.

The state is asking CMS to re-approve this additional funding retroactive to January 1 and until the end of the federal health emergency, which is expected to extend at least one more time, said Betsy Johnson, president of the Kentucky Association of Health Care Centers, the lobby of the nursing home.

“We are very grateful that both the Kentucky General Assembly and Governor Beshear appear to be on the same page regarding the needs of Kentucky skilled nursing facilities.”

Johnson said she was also pleased to hear the governor say that the rate increase will be reevaluated in late 2024. (Voters will decide in November 2023 whether Beshear gets a second term.)

“I think the Kentucky General Assembly realizes that we can never go back to the pre-Covid days,” Johnson said. “Our costs have gone up a lot, so this $ 29 add-on should really continue because that’s the reality of operating a skilled nursing facility today.”

Money to retain and hire nurses: Beshear said her budget will include scholarship money to recruit nursing students and loan forgiveness money to keep nurses in the profession and in Kentucky.

He said he will have $ 6 million a year to “significantly increase” scholarships, doubling the maximum award to $ 3,000 per semester. “That is a huge difference for students who want to go down this path, but worry about the cost of doing it,” Beshear said. Currently, about 150 students obtain scholarships funded by nursing license fees.

To keep nurses on the job, Beshear’s budget would create a five-year student loan forgiveness program with up to $ 3,000 annually for each year a nurse or faculty member is employed and remains at their job in Kentucky.

“We love our Kentucky nurses,” Beshear said. “We want to support them and we want more people to join the ranks.”

Lerae Wilson, director of nursing and vice president of patient services for St. Claire Regional Medical Center in Morehead, he thanked the governor in a video.

“Nurses are warriors,” he said. “We are fighting for the lives of those we serve … But these warriors are tired. They are exhausted. The pandemic has shown us that while we are good at what we do, mandatory overtime can only continue for a limited time. “. And with shortages like this, we have to have people who are willing to step into those shoes and continue that fight … We have to have replacements. ”

The Kentucky Nurses Association Projects that the state will need more than 16,000 more nurses by 2024 to replace those who will retire or leave the profession, as many have done during the pandemic.

Beshear also wants to use $ 2 million of federal pandemic relief money for a marketing and outreach program for the profession, and includes nurses in its proposed $ 400 million “hero bonuses” for work during the pandemic.

In December, Beshear signed an executive order that allows the state to take special steps to educate and license more nurses. Among other things, it requires that the State Board of Nursing approve requests to increase enrollment in schools that show sufficient resources to serve more students; requires schools to report vacant student seats to the board on a monthly basis; and requires the board to post them online, allowing schools with no vacancies to refer applicants to available slots.

Greater hunger: With the money from the pandemic, Beshear said, Kentucky eliminated a waiting list of about 7,000 seniors for free meals.

“I’m a little embarrassed that I didn’t know before this pandemic that we had a waiting list for hungry seniors in Kentucky,” he said. “That’s right. We had a list of how many older adults couldn’t afford regular meals and needed our help and we weren’t reaching all of them.”

So that never happens again, Beshear said, he wants $ 36.2 million over the next two and a half years for an additional 49,000 senior meals per week, which fully meets the current needs of Kentucky citizens.

“We should never again have a waiting list for hungry seniors to get help,” he said.

Also proposed in Beshear’s part of the health budget: