Scientists who first sequenced Omicron on what they’re seeing

THE CORRIDOR TO ARMAGEDDON IS LINED WITH STEEL 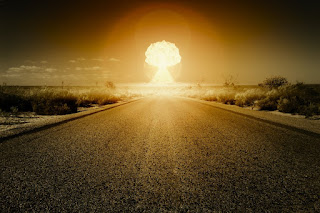 Away from their offices, in a bar distant even from their usual places, with noise around them, the two men still felt the need to speak in whispers.

Word of mouth was the only sure way to convey the thoughts and fears that he harbored so much and that cost them endless sleepless nights.

Everything was getting completely out of control.

No one could stop the momentum towards nuclear war.

The levers that could be pulled in earlier times to put things back on a smooth and pragmatic keel had been dispensed with in the days after September 11, 2001. Since then, a monster had advanced with no one at the wheel.

The decisions made on September 12, 2001 and the days immediately following had been made with goals in mind that could not be overridden under any circumstances. Those decisions must be carried out certain things, regardless of what must be done or the consequences that follow. The listed targets were set as cast in titanium, never questioned … never. To do otherwise would be to undermine the security of the United States and this would be considered high treason if ever attempted.

Now, twenty years later, two men huddled in a bar scared each other. They, like others at their level of government, had seen where the determination of frightened Americans from another time led … the possible annihilation of a large proportion of humanity. They had seen that the monster that was launched just after 9/11 was unstoppable, that its course was set, and that the end point was inevitable.

It did not matter what the present realities consisted of or the events that had made them come true. The goals set after 9/11 could not be denied, they were impervious to change and could not even be debated. Anyone who tried to initiate a dialogue based on changing the 9/11 protocols would lose their position immediately. The objectives were set without any attached plan B. They demanded that they be achieved, period. No debate. Definitely. And they would remain unchanged, totally uncompromising until they were met to the letter with 100% full compliance without the slightest shadow of a doubt.

America was going to be 100% safe. Nothing less. This required that all entities that did not fully comply with 100% American security in perpetuity should be removed, never to rise again.

There was to be no reduction in objectives and no commitment to command to action. There should be no debate or backtracking from the means that would be used to achieve the stated objectives.

Ethical and moral issues would not be factors that limit the actions to be taken. Nothing was to be considered out of the question for any reason or circumstance. Setting limits of any kind would tie the hands of those whose task it was to meet set goals. Questioning or amending these goals would not be tolerated at any level of political or military command.

However, circumstances had changed with the rise of Russia and, in particular, with regard to China, but none of the developments could be included in the protocols established twenty years earlier. The protocols were not to be changed. They could not be modified.

Therefore, the inviolable command required that Russia and China, or at least their leaders, be eliminated and friendly representatives established by the United States. This was the inflexible requirement of the 9/11 protocols.

This was the cause of all the heated whispers in the busy Washington bar.

The 9/11 protocols led inexorably to nuclear war and nothing could be done about it. All arms of the government were prepared to go ahead with the extermination program of the enemy from the day the protocols were agreed.

The mainstream Western media had also fully joined. The die was cast and no individual or group could and would never contemplate the monumental and unthinkable revolution necessary to change that fact.

Presidents could do anything, nor could any individual or group below that presidential level. None would even broach the subject. Do something crazy that ends your career.

Yet the campaign of helpless whispers continued, ineffective as it was … and totally ineffective.

Everyone recognized that the hallway to Armageddon was lined with steel.