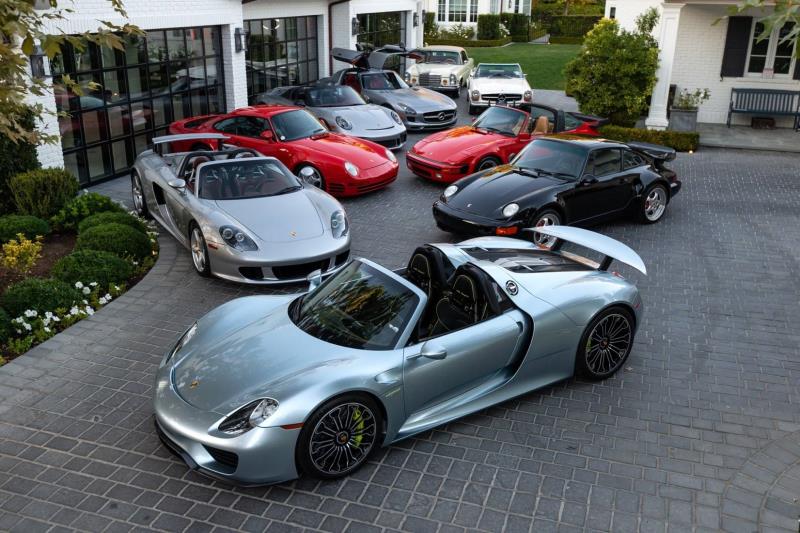 • Latest-production Mercedes-Benz 300 SL Roadster to top the list of sports cars across the block • One of one Mercedes-Benz 300 SL Gullwing • An icon of the ’80s – the only Cizeta-Moroder in existence offered by its illustrious owner original • Learn more at rmsothebys.com RM Sotheby’s is pleased to kick off the 2022 collector car auction calendar once again by returning to the stunning Arizona Biltmore & Spa grounds in Phoenix on January 27 for its 23rd annual sale at Arizona. The auction will host a wide variety of makes and eras, with sports cars and a single-owner collection leading the early highlights. Continuing as the established market leader in single-owner collection sales, The Tenenbaum Collection is one of the first highlights to go under the hammer in Arizona. This outstanding collection of European sports and supercars represents some of the best examples of European supercars and classics from Porsche. All nine cars have desirable specs, low production numbers, originality, and unique color combinations.

Topping the collection is one of the most iconic and technically advanced cars of its time, a 1987 Porsche 959. The model, which was developed for the fearsome Group B homologation class in the 1980s, wears a Guard Red exterior. on black leather. With around 14,000 km and recent restoration work, this 959 will cross the block accompanied by a set of tools and books (Estimate: $ 1,200,000 – $ 1,500,000). The collection also features two more examples of the peak development of Porsche sports cars of later times. The 2005 Porsche Carrera GT, in classic GT Silver over Ascot Brown leather, has only three new owners. At 5,482 miles at the time of listing, this well-maintained example will go under the hammer without reservation and to its new home with a seven-piece luggage set (Estimate: $ 1,000,000 – $ 1,300,000). The most modern of the trio, the 2015 Porsche 918 Spyder, again represents the peak of sports car technological development available at the time of production. With just 1,396 miles on the clock at the time of listing and only two registered owners, this limited-production Spyder is stunning in Liquid Chrome Metal Blue over Onyx Black with acid green trim (Estimate: $ 1,200,000 – $ 1,400,000).

Owned by an avid enthusiast, the collection consists of:

One of three cars billed in 1964, the 1964 Mercedes-Benz 300 SL Roadster offered in Arizona was the penultimate 300 SL to be delivered and is featured today in the original blue gray colors on a red interior. The late-production model remained sole proprietorship from 1971 to 2013 and received a full cosmetic restoration following the consignor’s purchase in 2014. Complete with luggage, books, tools and a hardtop, this 300 SL will lead the sports car list on the other side. of the block in Arizona (Estimate: $ 2,200,000 – $ 2,500,000). Proving that unique treasures still exist in a thriving classic car scene, the 1955 Mercedes-Benz 300 SL Gullwing is the only example to leave the factory with the striking combination of dark gray paint on a beige upholstered interior with red squares. and greens. seats of fabric. The car received regular care and maintenance throughout its useful life, and prior to being purchased by the current owner, it received extensive restoration and finishing work to bring it back to its original shine. It is, without exaggeration, a star of the auction (Estimate: $ 1,450,000 – $ 1,650,000). Without a doubt, the 1988 Cizeta-Moroder V16T It will turn heads when crossing the block. It is the original Cizeta-Moroder prototype and show car, the most famous example of the model and the only chassis to carry the Cizeta-Moroder nameplate. Chassis 001 received a full mechanical restoration by Canepa Design in 2018 and is now offered by its illustrious original owner, music producer and original Cizeta-Moroder investor, Giorgio Moroder. This car is an undoubted icon of the 1980s, where exotic sports car design was raised to a new level and is a once in a lifetime opportunity for collectors (Estimate: $ 900,000 – $ 1,200,000). Other European sports cars to join the early highlights in Arizona include a 1967 Lamborghini 400 GT 2 + 2. Fully restored by branding specialist Gary Bobileff and certified by Lamborghini Polo Storico, this example is featured in its striking original Blu Note on Tobacco colors (Estimate: $ 450,000 – $ 550,000). Owning a bespoke construction guided between its original owner and Alois Ruf himself, this 1985 Porsche RUF BTR III will cross the block accompanied by a series of handwritten letters, signed with Ruf’s nickname, ‘Luis’. Instead of the four-speed transmission that typically accompanied a first-generation Porsche 930, this example progressed from a four-speed stage I to a five-speed stage II and finally reached its current six-speed stage III status, all added with guidance from Mr. Ruf himself. The overall mod sum adds up to a serious car for Porsche collectors and driving enthusiasts alike (Estimate: $ 325,000 – $ 375,000).

Gord Duff, RM Sotheby’s global auction director said: ‘We have a wonderful starting offer for our Arizona sale, which is always a highlight of the year and will clearly show the way to a fantastic 2022. These first few batches show the quality and variety we always seek when we bring rare and exotic supercars through. from the times to the market. From the RUF to the Lamborghini and the entire Tenenbaum collection, we are confident that these high-quality cars will attract the attention they deserve from enthusiasts and collectors around the world. ‘ FOR MORE NEWS FROM RM SOTHEBY’S: #RMSothebys #RMArizona