Poll: Most Trump Voters Want Blue States To Break Off And Form Their Own Country 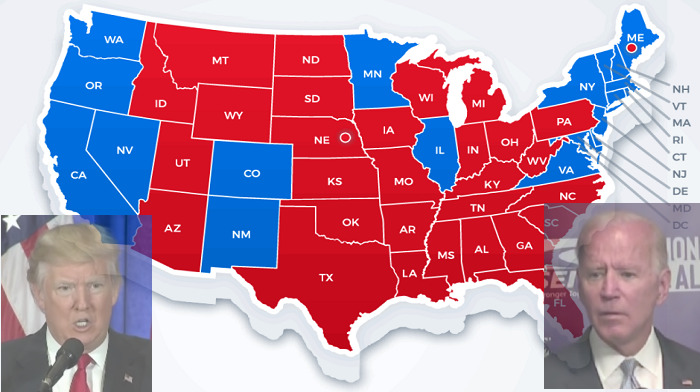 A collaborative poll by the UVA Policy Center and the Home Fire Project indicates that a majority of Trump voters think the political divide in America is so great that they would support a move by the Blue States to secede from the union.

Poll indicates 52 percent of Trump voters lean toward secession as a solution to the political differences that are currently taking over the country.

Not much lower, 41 percent of Biden voters at least somewhat agree with the same sentiment.

Center for Politics Director Larry Sabato writes: “Our new look at Biden and Trump voters with Project Home Fire presents some startling findings about the deep, wide and dangerous divisions between the two groups.”

RELATED: Rush Limbaugh Warns: America Could Have ‘Tendency Toward Secession’

Aside from the secession findings, the survey reveals additional trends that it describes as “dangerous and alarming” regarding the state of democracy in the United States.

Sign up to receive the latest Political news, insights, and commentary delivered right to your inbox.

Both Biden and Trump voters show a large percentage willing to propose that the incumbent president have unilateral decision-making power without restrictions from Congress.

A solid 46 percent of Biden’s voters believe “it would be better for America if whoever the president was could take action without being constrained by Congress or the courts.”

The system of checks and balances is what decentralizes the power of any individual or branch of government.

In all, according to this poll, 44 percent of Trump voters feel the same about the president’s power, a remarkable number considering who that would mean making decisions without control for the country at the present time.

5. Another interesting finding: About half of Biden / Trump voters agree that it would be better if a “president could take action without being constrained by Congress or the courts.” pic.twitter.com/6AQjX6ohWC

Rush warns that the country tends to secession

The late great conservative radio icon Rush Limbaugh, just two months before his death, warned that the United States seemed to be heading down a path in which secession would become more popular.

Limbaugh, winner of the Presidential Medal of Freedom and broadcast legend, observed that the nation is “tending toward secession” during a broadcast in December.

“In fact, I think we have a tendency to secession,” he originally said, speaking of a cultural divide in the country. “I see more and more people asking what the hell we have in common with people who live, say, in New York.”

“What makes us believe that there are enough of us to have a chance to win New York, especially when it comes to votes?” Limbaugh added.

Rush also stated that he had heard complaints from others who believe that “there cannot be a peaceful coexistence of two completely different theories of life, theories of government, theories of how we run our affairs.”

This new poll seems to indicate that Biden and Trump voters are experiencing almost irreparable and irreconcilable differences in how they view America.

Now is the time to support and share the sources you trust.
The Political Insider is ranked 15th on Feedspot’s “The Top 70 Conservative Blogs, Websites, and Political Influencers in 2021”.