Marine under investigation for speaking at Trump Rally 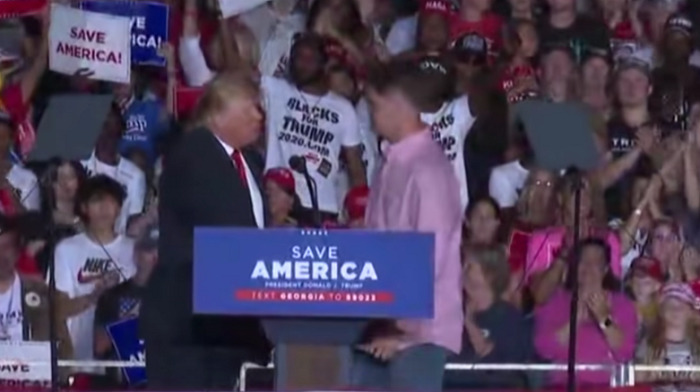 Lance Corporal Hunter Clark, a Marine who appeared on stage at a rally for former President Donald Trump last weekend, is now under investigation.

Task and purpose describes Clark as one of nearly 6,000 US soldiers tasked with defending Kabul airport as civilians desperately tried to flee the Taliban-controlled country of Afghanistan.

Apparently, Trump was informed that the Marine was the one captured in a viral video lifting a baby over a wall to put him to safety amid the chaos. He presented it as such.

Clark added to this by making the claim himself.

“I’m the guy who threw the baby over the wall and it’s definitely one of the best things I’ve ever done in my entire life,” he said.

Marine at Trump Rally under investigation

Hearing a Marine brag about his own work quickly raised a few eyebrows and Hunter Clark was the subject of some fact-checking by the Corps itself.

In fact, a spokesman for the Marine Corps issued a statement saying: “Regarding the viral photo that began circulating around August 20, 2021, the Marine identified in that particular image was not LCpl Clark.”

Sign up to receive the latest Political news, insights, and commentary delivered right to your inbox.

To make matters worse for Clark, he is now under investigation for attending a political rally.

“The 24th Marine Expeditionary Unit (MEU) has launched a command investigation into LCpl Hunter Clark’s attendance at the event last weekend to determine if Department of Defense policies were violated,” the spokesperson added.

The image of a 16-day-old baby that was delivered to a US Marine at the Kabul airport became a symbol of the evacuation from Afghanistan.

While the Marine at Trump’s rally may not have been the man who rescued the baby from the Kabul airport that day, the child is safe at the moment and reportedly living in arizona because to Marine.

The baby’s name is Liya, and her father told her Arizona Family details about his escape, an escape that he helped capture and symbolized the desperation of those trying to survive and escape from Afghanistan.

“That day I gave my baby to a complete stranger. The only thing I trusted was that he was a Marine and that my daughter would be safe, ”he explained.

Amazing quote from the father who gave his daughter to the Marines in Kabul: “That day I gave my baby to a complete stranger, but all I trusted was that he was a Marine, and my daughter will be well”. They went out and they are going to put their middle name “Marine”. pic.twitter.com/BUfwA7VFDt

Liya’s father hopes to one day meet the real Marine who took his baby to safety.

“Oh my God. I’d give him a hug. He literally saved my daughter’s life,” he said.

While one Marine is under investigation for attending a Trump rally, another has been jailed for criticizing military leaders for their ineptitude that led to desperate evacuations in Afghanistan in the first place.

Marine Corps Lt. Col. Stuart Scheller has been jailed following his criticism of the failed withdrawal which, against orders, he repeatedly posted on social media.

Naval Officer Stuart Scheller has been relieved of duty for this video.

Dozens of Republican lawmakers on Thursday wrote a letter to the US Marine Corps requesting that Scheller be released from pretrial confinement.

The Marine Corps assured Scheller “will be granted all due process.”

His hearing was postponed until next week, according to the Daily mail, while his lawyers and the Corps seek to reach a resolution.

Think about what is happening here. The Afghanistan debacle resulted in the death of 13 service members. It resulted in a drone attack that left 7 children dead. The result was that hundreds of Americans and Afghan allies were forced to fend for themselves against the Taliban.

And the only two people being investigated for their actions right now are a Marine who attended a Trump rally and another who held the leadership accountable.

Now is the time to support and share the sources you trust.
The Political Insider is ranked 15th on Feedspot’s “The Top 70 Conservative Blogs, Websites, and Political Influencers in 2021”.