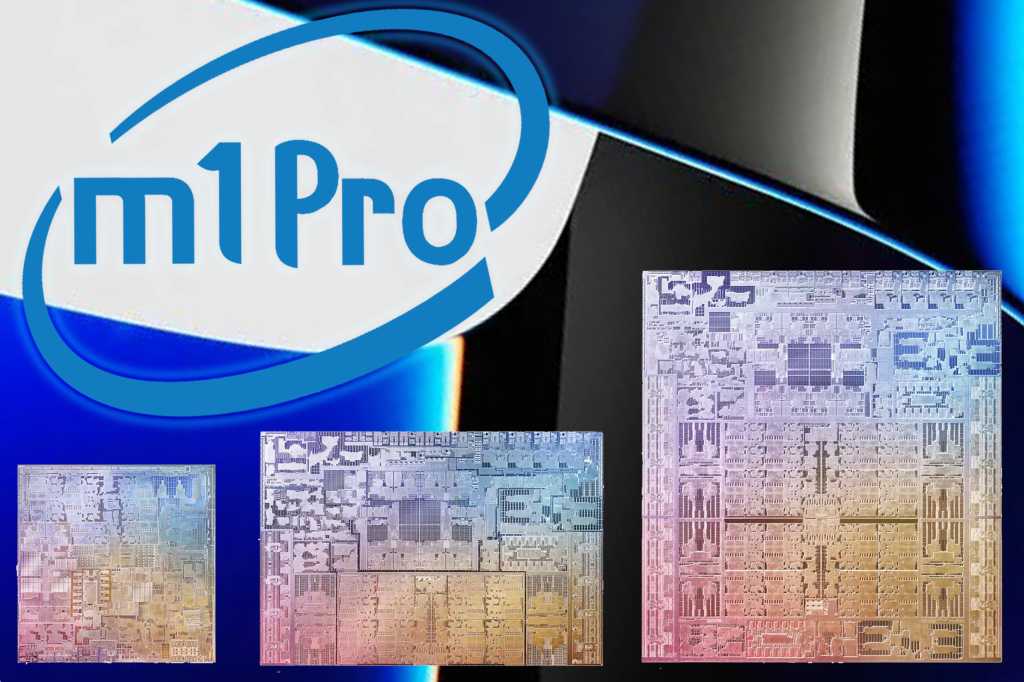 In a recent Axios interview, Intel CEO Pat Gelsinger said he wants to get Apple’s business back by making better products. “Apple decided they could make a better chip themselves,” he said, continuing the understatement of the year: “And, you know, they did a pretty good job.”

Apple’s M1 processor offered performance on par with the more powerful Intel laptop chips while using a tiny fraction power. When I reviewed the M1 MacBook Air, I came to the same conclusion as most other reviewers: Apple’s silicon is legitimate. It’s shocking how much better a comparable Intel chip is. “And this is just the low-end chip,” I said at the time. “Wait until the big chips arrive!”

And now, with the M1 Pro and M1 Max, the big chips are here and Apple is about to embarrass Intel again.

Doubling with the M1 Pro

The M1 Pro takes everything about the M1 and almost doubles it all. High-performance CPU cores double from four to eight (interestingly, high-efficiency cores have been reduced from four to two). The GPU cores have doubled from eight to 16. The memory bus width has doubled from 128-bit to 256-bit, giving you twice the memory bandwidth (Apple also switched to LPDDR5). Instead of the 8GB or 16GB options, the memory has been doubled to 16GB or 32GB.

Apple says the CPU performance is up to 70 percent better than the M1, and the GPU is up to two times faster. Sure, these are all Apple performance numbers, so take them with a grain of salt until we can verify them ourselves. But in our experience, Apple rarely exaggerates its claims in this area. Apple’s performance comparisons can be frustratingly vague, but they’re not silly.

Intel’s Alder Lake processors are on the way, and they should be a huge upgrade from the Tiger Lake architecture that the M1 has already trampled everywhere. But is it more than 70 percent better? Is the integrated GPU more than twice as good? I’m sure Alder Lake’s desktop CPUs will be impressive, but Intel won’t come anywhere near this performance in the roughly 35-45W class of laptops.

The M1 Pro is a massive 33.7 billion transistor. That’s bigger than a GeForce RTX 3090 desktop GPU.

Doubling again with the M1 Max

Oh, duplicating the M1 is not enough for you? What about us duplicate it again? The M1 Max is a total kick in the teeth. It has the same CPU as the M1 Pro, but doubles the GPU again to 32 cores, doubles memory to 32/64 GB, and doubles memory bus and bandwidth, up to a staggering 400 GB / sec. Even the multimedia engine is twice as fast as that of the M1 Pro.

Let that sink in. A CPU that could easily trade blows with an 8-core AMD Zen 2 processor, a 10.4 teraflop GPU, and 400GB / sec of unified memory bandwidth … Apple basically crammed a Playstation 5 into a 14-inch. , A 3.5 pound laptop that has 17 hours of battery life!

Of course, Apple’s GPUs don’t have ray-tracing acceleration hardware (more is a shame) and it’s not that Macs are exactly on the cutting edge for big game releases. No one would suggest you buy a new MacBook Pro if gaming is your main passion.

But Apple seems to have done its best to do more than just throw more cores into the thing. The new M1 chips match increases in core count with increases in cache memory and memory bandwidth to avoid bottlenecks. Even SSDs are blazing fast. Apple promises 7.4 GB / s, which is twice the SSD that is already blazingly fast in existing Mac M1s.

It’s no wonder the M1 Max is a staggering 57 trillion transistors. There isn’t a laptop chip on the market even close to that. Even AMD’s 64-core Epyc “Rome” processor for large server installations has fewer than 40 billion transistors.

Intel is going to take a while

The first Geekbench 5 scores leaked for the M1 Max show a single-threaded score in the range of 1,700 to 1,800 and a multi-threaded score of 11,000 to 12,000. That’s roughly 15 percent higher than the fastest Intel-based laptops (Geekbench scores for Intel chips are highly dependent on the laptop’s exact setup and cooling). Could a laptop with Intel’s new Alder Lake architecture achieve those scores? Maybe, and we could even see high-end laptops using those chips within the next three to six months.

But no Alder Lake chip will come close to the performance of the M1 Pro / Max without using much more power. And neither Intel nor AMD have a built-in graphics chip on their roadmap with nothing remotely like that in the M1 Max. And Apple has a huge memory bandwidth advantage.

It’s about more than just CPU and GPU performance, of course. Apple has an extremely faster 16-core neural engine and insanely impressive media processor that encodes and decodes HEVC at incredible speed, and even adds ProRes encoding and decoding this year. All of Apple’s standard frameworks take advantage of all of these “non-core” parts of the system-on-chip, making it relatively easy for developers to just make the software fly.

The real question is how long can Apple keep this going? Anandtech takes a very detailed and fascinating deep dive into the A15 SoC, discovering that it is even faster and more energy efficient. Those microarchitectural changes are sure to find their way to the M2, M2 Pro, and M2 Max over the next year or so.

You can bet we’ll see another 15-20 percent performance improvement next year, which neither Intel nor AMD won’t even be able to come close in the same power envelope. The next architecture will use a more advanced manufacturing process and the march will continue. But can Apple continue to offer those performance improvements every year? Sometime, have to decrease, right?

Apple has certainly defied expectations with its iPhone and iPad processors over the years. We’ve heard that Qualcomm’s next chip will outperform Apple’s best more times than I can count, and Apple manages to stay two steps ahead. It’s probably silly that Mr. Gelsinger thinks that Intel, or anyone else, will deliver a superior product in the next two to three years, but there is little doubt that Intel and AMD’s attempts to “beat the M1 Max” ( and the M2 Max in one year, and the M3 Max the following year) will mean better laptops for Windows PC buyers.

As for whether Intel has a chance to win back Apple’s business? It’s not a possibility, Mr. Gelsinger. And running a silly ad campaign aimed directly at Apple won’t help.

I have written professionally about technology for my entire adult professional life, over 20 years. I like to find out how complicated technology works and explain it in a way that anyone can understand.