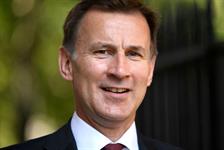 In a series of tweets, the former conservative health and social care secretary said a short-term ‘big recruiting drive’ was needed to ensure that GPs leaving the profession do not exceed the number of people receiving training each anus.

Hunt, who chairs the influential House of Commons health and social care selection committee, insisted that the only action that would prevent more GPs from opting to work part-time or retiring early is a “ clear plan to end unsustainable pressure ” on practice teams.

His comments came after GP leaders were “dismayed” by a government plan for general practice that they say “offers very little” to address the problems facing the profession. The plan was billed as a ‘support package’ for the general practice, but has been condemned for not offering meaningful support while putting more pressure on face-to-face access.

Some thoughts on the government’s GP bailout plan announced today … they are right first to address the crisis in this sector. Some good ideas, including a new military-inspired NHS pact and more transparency on performance.

Mr. Hunt suggested incentives to persuade returning GPs, who joined the workforce again during the pandemic, to extend their service and relax immigration rules for doctors abroad as ways to reinforce the force. work of family doctors.

The former health secretary, who failed to keep his promise to bring in 5,000 more GPs during his tenure, also suggested that reforming pension rules could help deter doctors from retiring early.

He said: ‘Sticking plaster after sticking plaster will no longer cut it. Unless we fix long-term NHS workforce planning, the future will be bleak and the number of face-to-face medical appointments will decrease, not increase.

That means, above all, reviewing the broken workforce planning with a separate system, modeled after something like the Office of Budget Responsibility (OBR), to ensure that there are public and transparent projections about the number of doctors we should train in. each specialty.

“If we continue to leave that process to haggle between the Treasury and ministers on spending reviews, it will never get the focus it needs, and the crisis will just get worse.”

Plans set out by the government and NHS England include a £ 250 million winter access fund, to be implemented between November this year and March 2021. Funding is explicitly linked to demands for internships to offer more appointments overall. , at a time when the profession is already meeting more than ever, as well as demands for more face-to-face appointments.

But GP leaders warned that the plans threatened to increase pressure on the general practice and could lead to further abuses in the wake of sustained attacks on face-to-face access.

RCGP President Professor Martin Marshall said at the university conference in Liverpool that the ‘so-called support package’ ‘was definitely not the solution to the problems we face’. BMA GP committee chair Dr. Richard Vautrey said the level of ignorance shown by the government’s plan about the problems facing primary care was “really scary.”

Walmart moves towards the self-insured space with the Transcarent association