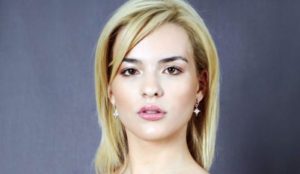 This year’s Miss Universe pageant will be held in Eilat, Israel. This, of course, has caused great consternation among the army of Israel-haters, who since the beginning of October have been pressuring contestants to withdraw from the competition rather than be seen to endorse the gruesome state of Israel. Israel’s “apartheid” showing up in Eilat.

Much of the news concerned someone who was described, falsely, as it turned out, as Miss Greece, who announced that she would not attend due to Israel’s harsh policies towards the Palestinians.

On October 1, the supposed winner of the Miss Greece pageant, Rafaela Plastira, gave a vague statement that she was withdrawing from competing in Miss Universe because, she murmurs, Israel.

His exact words were:

I will not attend “Miss Universe” this year. The reason for that is the country. I am not disrespecting the country at all. I love all the countries around the world, but my heart goes out to all the people who fight there. [sic] lives in Israel and Palestine. I can’t go up on that stage and act like nothing is happening when people are fighting over there. [sic] live out there.

It’s a confusing mess, but if you want to interpret that as an anti-Israel statement, go ahead.

Greek news sites ignored his story. And that was because Rafaela Plastira is a sham. She was never Miss Greece. His self-description was uncritically accepted by many outside of Greece who were unable to verify his story because he appealed to the international army of BDSers. She was considered the brave contestant who withdrew from the Miss Universe pageant so that it would not be thought that she had endorsed Israel. Rafaela Plastira called herself “Miss Grecia” and the media mentioned her that way. But she is simply a model who won a local beauty pageant and decided to get a promotion. According to a statement posted on Facebook by Giorgos Kouvaris, President of Star Hellas, Plastira “won the Star Hellas 2019 title, and this is the only title it has. She was never supposed to represent our country in the Miss Universe pageant. “

And then there is Miss Morocco. The “Palestine Solidarity Alliance” tweeted that Miss Morocco had announced that she was withdrawing from the Miss Universe pageant in solidarity with the Palestinians. That was a lie. Miss Morocco withdrew because she had severely sprained her ankle and would not have been able to walk majestically on stage. She posted her ad, with a video showing her lying on a hospital gurney with her ankle and lower leg tied tightly, and the doctor who treated her standing next to her. There is no reason to think she was lying and in fact it would have made little sense for her to boycott Israel, given that her own country, Morocco, a member of the Abraham Accords, has just signed an arms purchase agreement. of Israel, and is doing everything it can to get closer to the Jewish state.

Despite Miss Morocco making clear the reason for her withdrawal, Israel haters continue to hint that she did so out of her alleged desire not to “‘legitimize” Israel. This is an evil product of your perfect imaginations.

Then there’s the months-long campaign by the Africa4Palestine group, in an attempt to pressure and harass Miss South Africa, Lalela Mswane, until she agrees to withdraw from the Miss Universe pageant. He has managed to block some particularly insistent haters of Israel on social media. And she’s still committed to going to Eilat. That hasn’t stopped the BDS Africa4Palestine (AFP) group from announcing that it has effectively pulled out of the competition due to its (non-existent) antipathy towards Israel.

Here’s the excited announcement from Africa4Palestine:

We look forward to the formal announcement and look forward to Miss South Africa [sic] Withdrawing sets an example for other contestants who may be afraid to publicly defend human rights. Miss South Africa will now join a growing list of contestants who have withdrawn from the upcoming Israeli pageant, including Miss Malaysia, Miss Greece, Miss Laos and Miss Indonesia, who will not be attending this year’s Miss Universe taking place in Apartheid. Israel.

We have received information about Mswane’s withdrawal following the national protest and public calls from South Africans, including Nelson Mandela’s grandson, Chief Zwelivelile “Mandla” Mandela (MP), and other notable personalities, for Miss SA to cancel their participation. at the event organized by Israel. . Miss South Africa was trending in the country yesterday, but for the wrong reasons. We are glad that it now appears that common sense has prevailed and that Miss South Africa is choosing to be on the right side of history by withdrawing from the Israeli-hosted event.

All of that was a lie. Miss South Africa is determined to go to Israel for the pageant and has never suggested otherwise. In fact, she has managed to block many of her torturers, those who pressure and harass her to withdraw, from social media.

As for the other contestants that Africa4Palestine claims withdrew from the Miss Universe pageant out of a desire to distance themselves from “apartheid Israel”, they include “Miss Malaysia, Miss Greece, Miss Laos and Miss Indonesia”. Africa4Palestine hopes you don’t do a little searching on the internet, because that would allow you to discover that there was no Miss Malaysia, no Miss Laos, and no Miss Indonesia this year.

If I had searched, I could have discovered this:

In a statement, the Miss Universe Malaysia Organization (MUMO) announced that it will skip the Miss Universe 2021 pageant due to the worsening Covid-19 outbreak and travel restrictions related to the pandemic.

Unfortunately, due to the worsening Covid-19 situation that has resulted in limited international and domestic travel, we have not been able to host our local Miss Universe Malaysia 2021 pageant.

“Therefore, we have declined the invitation to this year’s contest. and unfortunately I couldn’t hold a local Miss Universe Malaysia pageant this year, ”the MUMO statement said.

Laos was also unable to host a Miss Laos pageant this year, due to the pandemic:

The Miss Universe Laos organization, just a few hours ago, issued an official statement that Laos will not send its representative to Miss Universe 2021. The statement posted on the official Miss Universe Laos social media account cited the Delta COVID-19 virus pandemic as its main reason, saying the global health crisis resulted in limitations and difficulties on international flights. in obtaining visas. Organizers added that they were unable to host the national Miss Universe Laos pageant due to the situation.

Miss Indonesia will also not go to Eilat, nor will contestants from Barbados, Belize, Russia and Uruguay, who cited travel restrictions and other issues related to the pandemic.

But only one alleged contestant has said that she has withdrawn from the contest so that she is not seen as supporting Israel. That person, Rafaela Plastira, falsely described herself as “Miss Grecia”; the real Miss Greece, Sofia Arapogianni, will go to Eilat, eager to participate in the Miss Universe competition.

Africa4Palestine will no doubt be infuriated to learn that the United Arab Emirates, an Arab and Muslim country, is sending a contestant to Eilat. So despite its hostility towards Israel, Turkey is. So are half a dozen other Muslim lands.

The lies of the Palestine Solidarity Alliance and Africa4Palestine are now on display to the entire world. Lalela Mswane blocked her stalkers Africa4Palestine on social media. And she is enthusiastically preparing to participate in the Miss Universe pageant that awaits her in Eilat in mid-December.

There will be contestants from at least 78 countries in Eilat. Not a single legitimate contestant, who leaves out the strange Rafaela Plastira, will stay away due to anti-Israel animosity.

And now Israel haters have put on their panties to no avail, those 78 lovely girls strutting on the sunny Eilat stage, let the ladies begin!