General practice is evolving faster than ever, says RCGP president 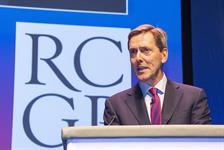 In a keynote address at the 2021 RCGP annual conference in Glasgow, Professor Marshall said that the past 18 months had been “ enormously challenging ” for everyone in general practice, paying tribute to the GPs who lost their lives. working on the front lines during the COVID-19 pandemic. .

The general practice ‘got on with the day’s work’, transforming in step with the way services were delivered to protect patients and maintain care for the most vulnerable, while politicians and the media focused on the intensive care units, he said at the conference.

The practices continue to manage the long-term effects of the pandemic, he said, supporting patients whose treatment is delayed by the NHS delay and those with prolonged COVID along with other care. Meanwhile, the COVID-19 vaccination campaign, hailed this week by MPs for redeeming ‘lingering flaws’ elsewhere in the UK pandemic response, was successful in large part due to the efforts of the general practice. said the president of the university.

Describing the general practice as “phenomenal”, he condemned as “unfair, demoralizing and indefensible” the “widespread defamation of hard-working GPs and our teams” that has been linked to an increase in abuses against hospital staff. primary care.

Professor Marshall criticized the ‘so-called support package for general practice in England’ announced by the government, warning that it was ‘definitely not the answer to the challenges we face’.

He acknowledged that many in general practice had been struggling to remain optimistic even before the pandemic, but told the conference: “Ours is not the first generation to feel this way.”

History shows that it takes a long time for governments to realize that “ a crisis in general practice quickly leads to a crisis in the rest of the NHS, ” said Professor Marshall, and it was “ frustrating that this happened once more ” despite warnings for more than a year. decade.

He said expanding the GP workforce was essential to solving the “undoable workload” problem and that, in the short term, measures to reduce the bureaucratic burden of general practice could help the profession. to cope with the growing demand.

But he said that “ the evolution of general practice is happening now at a faster rate than has been seen in the past, ” and argued that while many of the changes that were occurring were simply unavoidable, they could provide an opportunity both to improve patient care and the work environment for GPs.

He said at the conference: ‘I recognize that there are some doctors who don’t like some of the trends, but I think most of them are inevitable and that if we are smart we can make them work for the benefit of our patients and our specialty. ‘

He said the university was working to develop a better understanding of the ‘evolving role of the GP within a multidisciplinary primary care team’, arguing that while the traditional role of the GP was efficient, it was becoming ‘less and less deliverable ‘in the face of increased demand.

‘The traditional GP-as-all-things-for-all-people model was an efficient model – surprisingly for economists who talk about us “working to the top of our license” without understanding what we do or what our license should look like ‘, said the president of the university.

“But when demand exceeds supply, the traditional model becomes less and less viable in most practices. Now we see GPs focusing on the areas of work where they can add the greatest value: classification because we are good at risk management and quick decision making; handling complex biopsychosocial problems because we are experts in complexity; and take a more strategic role in improving the health of our communities.

‘Therefore, a growing number of GPs are trying to create space by spending less time on the more transactional presentations that used to take up much of their time, and by doing so, they are beginning to free up time to focus on the areas in which they are that can make a bigger difference.

He said the change was complex and would require more training, and changes in training, for GPs as they adapt. But he added: ‘These are not easy questions, but practices across the country are finding answers. That’s what general practice does; Driven by our deeply ingrained values, we adapt, evolve, innovate.

Why Colin Powell Was Vulnerable To COVID

Hospitals continue to scramble for operations, finances get back on track, Kaufman Hall reports