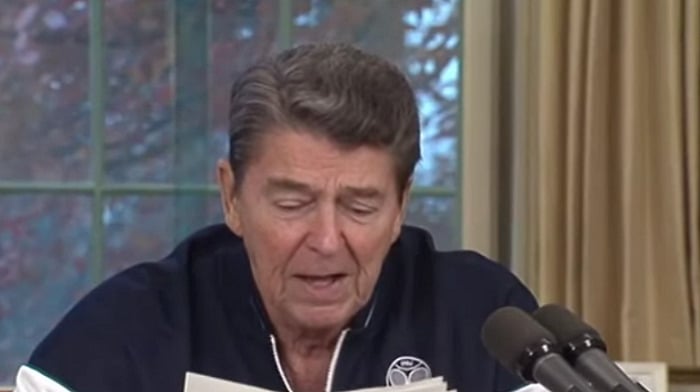 In a radio address to the nation on Thanksgiving week 1988, President Ronald Reagan spoke of three things that are missing in America under the current president in our time: prayer, prosperity, and freedom.

At a time when the media mocks religious devotees, the economy is in shambles and people lose their livelihoods and when freedom is seemingly a thing of the past as foolish liberals impose masks and mandates to the people. Reagan’s words take on new meaning.

Nostalgic meaning. About what America once was.

RELATED: A record 4.4 million Americans quit their jobs in September

President Ronald Reagan’s speeches are unmatched when it comes to his connection to the American people and singing the praises of the greatest nation on Earth.

This radio address was no different.

Reagan spoke of the families who sat at the Thanksgiving dinner table to say “thank you,” asking for the “blessing of the Lord” and how “God has kissed” this nation with peace and abundance.

In his message, Reagan noted that “Americans have much to be thankful for” because of the “great expanse of our nation” and “the rolling hills of our vast farmlands.”

And it reminds us that prosperity produces positive results in other facets of life.

“Prosperity is not an end in itself. It helps us pay attention to the most important things: raising our children the way we want them to be raised, helping those in need and uniting nations in peace, ”he said.

Reagans words about freedom, something for which the United States has always been a beacon around the world, seem most powerful in the era of the pandemic.

“We will give thanks for this and one more thing: our freedom,” says the late and great president.

“Yes, in the United States, freedom seems like the air that surrounds us: it is there; It’s sweet, although we rarely think about it, ”he added.

“However, as air fills our lungs, freedom fills our souls. Give encouragement to our laughter and joy. Give voice to our songs. It gives us strength as we run for our dreams. “

“Think of how many countries dream of going on strike on your own and starting a business is risking, not a better life for you and your children, but a prolonged stay in a prison cell,” he says. “And then think how blessed we are to be Americans.”

Today, President Biden is fighting desperately to penalize companies and fire employees who don’t mind submitting to his vaccine mandates.

We were much more blessed under Reagan than under the latter regime.

In a radio direction by Reagan in 1986, the Republican president celebrated the generous spirit of Americans about the “generosity” of the federal government.

In it, he highlighted how the benevolence of the private sector outweighed the expansion of the federal programs.

Citing a poll at the time, Reagan said, “No matter how big the government is and no matter how many services it provides, it can never replace volunteers.”

In his address to the nation on Thanksgiving Day 1985, Reagan mentioned God, freedom of religion, free speech, freedom of the press, and limited government – all values ​​that our current president has worked diligently to erode. during his first ten months in the White House.

“Today, while religion is suppressed in perhaps a third of the world, Americans are free to worship the Almighty however we want,” he told the people.

Reagan added: “While entire nations must bear the yoke of tyranny, we are free to speak our minds, to enjoy a vigorous and unfettered press, and to hold government to the limits we consider fair.”

Perhaps most presciently, it speaks of holiday restrictions that Americans at the time could not bear.

“While millions live behind the walls, we remain free to travel across the country to share this precious day with those we love most deeply: members of our families,” he said.