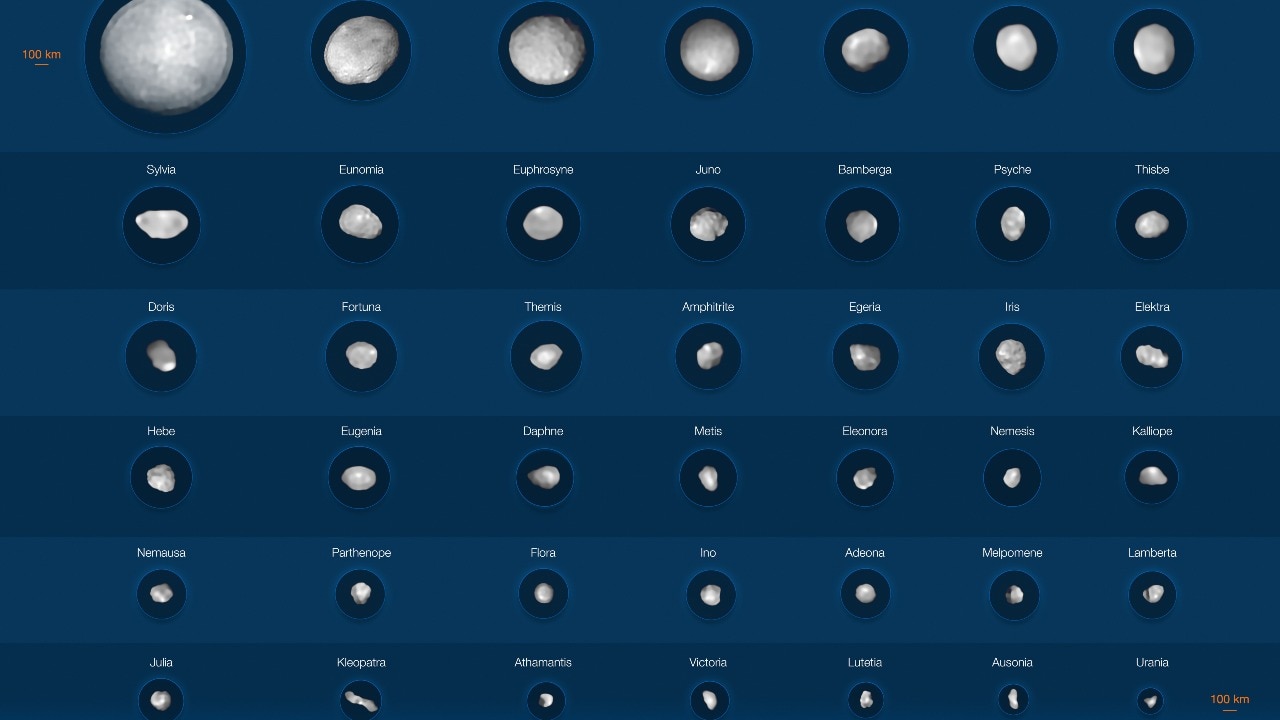 The sharpest images of 42 of the largest asteroids in our solar system have been published by the European Southern Observatory (ESO). Detailed images were released and captured by ESO’s Very Large Telescope (VLT) in Chile. with the release date and number being a tribute science fiction writer Douglas Adams.

Observations of the asteroids, which were located between Jupiter and Mars, reveal a wide range of peculiar asteroid shapes, from dog bones to spherical. The research is helping astronomers trace the origin of asteroids in our solar system.

The researchers realized that the observed bodies can be divided into two families after reconstructing their shapes. Some of the asteroids were perfectly spherical like Ceres and Hygiea, while there were others with a more “peculiar, elongated” shape, the main one being Cleopatra, the dog-bone asteroid.

Many of the objects were over 100 kilometers in size, with Ceres and Vesta being the two largest objects at 940 and 520 kilometers respectively.

According to Pierre Vernazza of the Laboratoire d’Astrophysique de Marseille in France, only three major main asteroid belts, Ceres, Lutetia and Vesta, have been photographed with a high level of detail to date, as they were visited by the space missions of the Europeans. Space Agency and NASA, Rosetta and Dawn, respectively.

Vernazza and his team had conducted a comprehensive study of the main bodies in the asteroid belt between 2017 and 2019, the results of which were published in Astronomy and Astrophysics on October 12, 2021.

The latest images of 42 asteroids signify several key features, such as their 3D shape density, which had previously remained largely unknown. By combining the shapes of the asteroids with information about their masses, Vernazza and his team found that the density of the objects varied considerably in the size of the sample.

The results support the theory that the less dense asteroids migrated to their current location after forming in the remote regions beyond Neptune’s orbit. According to Josef Hanuš of the Charles University of Prague, the study provides “strong support for the substantial migration of these bodies since their formation”, adding that this was the only explanation for the variety in their composition.

The asteroid sample number was chosen as a tribute to the series. The Hitchhiker’s Guide to the Galaxy by Douglas Adams, which was published 42 years ago on the same date. Referring to the author, ESO said the images were “a leap forward in asteroid exploration, made possible by ground-based telescopes, and help answer the fundamental question of life, the universe and everything.”

In the book, the number 42 is said to be the answer to the same fundamental question.