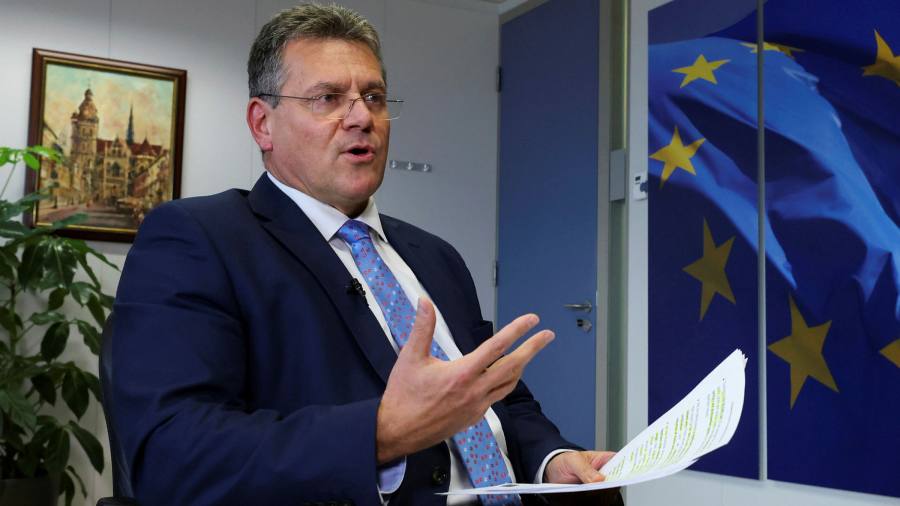 Major EU member states are pressing Brussels to come up with tough retaliatory measures if the UK follows through on its threat to suspend the Northern Ireland trade deals enshrined in the Brexit deal.

France, Germany and the Netherlands, a traditional ally of the United Kingdom, were the most vocal, supported by Italy and Spain, the diplomats added.

Options being discussed in EU capitals include curbing UK access to the bloc’s energy supplies, imposing tariffs on British exports, or, in dire circumstances, terminating the trade deal between the two parties.

UK Brexit Minister Lord David Frost warned on Tuesday that London could attempt to suspend much of the Northern Ireland Protocol, the part of the withdrawal agreement that sets out the region’s trade agreements since Britain left the EU.

The protocol calls for customs and regulatory controls on goods going from Britain to Northern Ireland that came into effect in January, and these agreements have become a bitter source of disputes between the two parties.

By invoking article 16 of the protocol, the UK could ignore many of its requirements, but the EU would be expected to retaliate in such circumstances.

One diplomat said that EU capitals wanted the commission to come up with a “legally sound, proportionate and robust response.”

Under the Brexit deal, the UK agreed to allow Northern Ireland to remain in the EU’s single market for goods to avoid a hard border on the island of Ireland.

Sefcovic on Wednesday proposed changes to the protocol, including removing many of the controls on food going from Britain to the region, in an effort to resolve the dispute with the United Kingdom.

But EU member states fear that the UK, after demanding a fundamental rewrite of the protocol, will reject the bloc’s proposals and instead activate Article 16.

“There is a strong possibility that Frost will say ‘We want the moon,'” said another diplomat, adding that the UK’s Brexit minister could try to ditch the Northern Ireland protocol entirely.

“Frost knows he’s playing with fire. But when you play with fire, you get burned. The EU has a wide range of options to counterattack the UK: for example, the supply of energy. “

UK trusts submarine cables and pipelines connect it to the EU for up to 10 percent of its electricity supply and 12 percent of its gas. France has already threatened to cut its 2 gigawatt power cable to the UK in a separate dispute over post-Brexit fishing rights.

Frost travels to Brussels on Friday to speak with Sefcovic, with both parties far apart on the crucial question of whether the European Court of Justice should continue to play a role in monitoring the Northern Ireland protocol.

The FT has revamped Trade Secrets, its must-read daily report on the changing face of international trade and globalization.

sign up here understand which countries, companies and technologies are shaping the new global economy.

UK Health Secretary Sajid Javid said “there should be no role for the ECJ anywhere in the UK.” Frost, however, has allowed himself some leeway, saying the problem was not a “red line.”

So far neither party has shown interest in adopting a possible legal compromise solution similar to that used in bilateral treaties signed by the EU with neighbors such as Ukraine.

Under that model, proceedings go first to an arbitration panel, while the ECJ would continue to issue binding opinions on matters of EU law.

“What stands in the way of progress is News Primer,” said Anton Spisak, a former UK adviser on Brexit. “Substantive solutions require changes to the text of the protocol, which the EU says it cannot do, while the UK says it will accept nothing less.”

If the UK activates Article 16, there would be a month of talks between the two parties, after which the EU could retaliate with “proportionate” countermeasures, pending a ruling by an independent arbitrator.

EU measures could include tariffs on UK exports, such as cars. Simply increasing the EU controls that are already allowed on British goods moving through the English Channel could lead to major congestion.

The question is why sign new agreements with the United Kingdom, if they are two such important agreements. . . are not respected?

The EU could ultimately end its trade and cooperation agreement, which guarantees duty-free trade with the United Kingdom, one year in advance.

“The EU would closely examine potential countermeasures across the entire landscape of EU-UK cooperation, including the ATT,” said another diplomat.

Sefcovic told the Financial Times in an interview on Wednesday that he preferred a “constructive path” with the UK.

“This week it’s not about Article 16, to be honest, it’s about the proposals. And I am confident that Lord Frost and the UK government will see great credit in what we are bringing to the table, ”he added.

Sefcovic said he was open to different solutions when he met with Frost on Friday, but added: “This process cannot go on forever.”

He warned that British intransigence was blocking collaboration with the EU in fields such as defense and foreign policy.

Sefcovic said the EU saw the withdrawal agreement and the trade and cooperation agreement as a “baseline” from which to build a broader relationship.

“The question is why sign new agreements with the United Kingdom, if these are two such important agreements… Are they not respected?” “To be honest, that’s a pretty fundamental issue. I thought that with a country like the UK we would never have this discussion. Once you sign a deal, you respect it. “

Britain after the Brexit newsletter