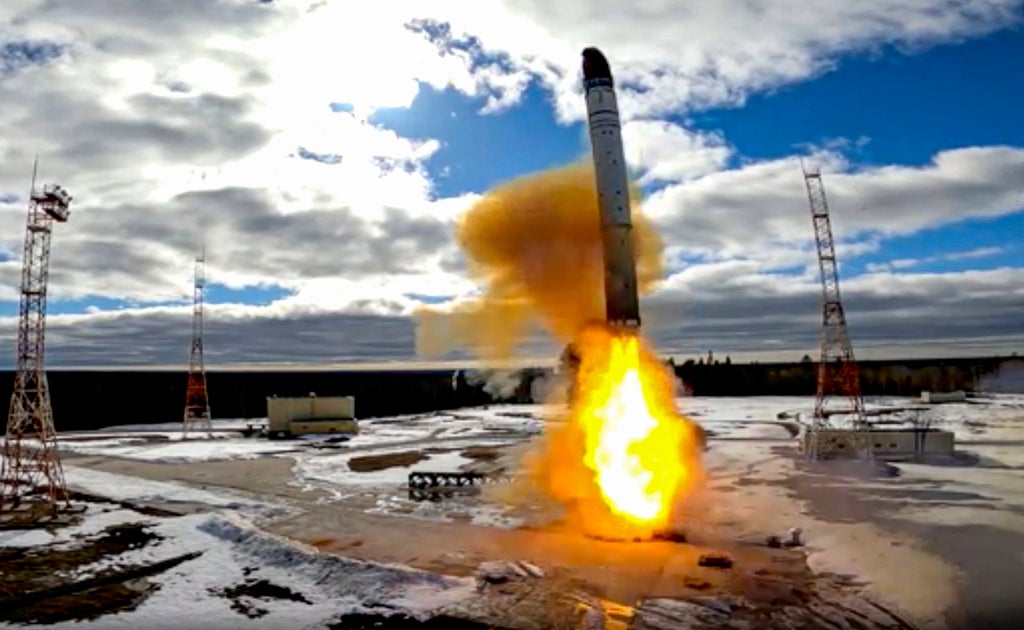 Russia has made new threats to use its deadly Satan-2 hypersonic nuclear missile to attack Britain in just ‘200 seconds’.

The warning from the deputy chairman of Russia’s defense committee, Aleksey Zhuravlyov, comes as Finland is ready to join NATOY Sweden is ready to follow your example.

“If Finland wants to join this bloc, then our goal is absolutely legitimate: to question the existence of this state. This is logical,” Zhuravlyov said in an interview with Russia 1 state television.

“If the United States threatens our state, it is good: here is the Sarmat [known Satan-2] for you, and there will be nuclear ashes from you if you believe that Russia should not exist. And Finland says it’s one with the US Well, get in line.”

Last month, Russia tested its new intercontinental missile, the Sarmat also known as the Satan 2. He announced that the warhead that could target Europe and the US would be deployed in the fall. The Sarmat is capable of carrying 10 or more nuclear warheads and decoys, and of striking targets thousands of kilometers away.

Asked if Russia would now relocate nuclear weapons to its border with Finland, he said: “What for? We don’t need to.

“We can attack with a Sarmat from Siberia and even reach the UK. And if we attack from Kaliningrad… the hypersonic’s range time is 200 seconds, so go ahead, guys.

“On the Finnish border we will not have strategic weapons, but Kinzhal class, one that will reach Finland in 20 seconds, or even 10 seconds.”

Russia has expressed dissatisfaction with Finland’s intention to join NATO and said it would take “retaliatory measures” of a military-technical and other nature, to stop the rise of threats to its national security.

Zhuravlyov claimed that the United States and the United Kingdom are provoking Finland to join NATO. “The Finns have nothing to share with us. They get more than 90 percent of their gas, wood and much more from us.

“Who needs to fight first of all? The Finns? They are not afraid that Russia is attacking them. Of course, sooner or later the Americans will force them to do so.

“Just as they forced Ukraine to do it, they are trying to force Poland and Romania. And, as practice shows, they are successful.”

Deputy Foreign Minister Alexander Grushko said Moscow will take appropriate precautionary measures if NATO deploys nuclear forces and infrastructure closer to Russia’s border, according to the RIA news agency. He added that Moscow has no hostile intentions towards Finland and Sweden and sees no “real” reasons for those two countries to join the NATO alliance.

In an interview with many colorful comments, such as labeling the Baltic nations Lithuania and Estonia as stink bugs, Zhuravlyov also claimed that St. Petersburg, Putin’s birthplace, could be NATO’s first target in a war with Russia. , adding that the United States “will do everything in its power to make World War III happen.”

“They [US] they will be able to attribute all their problems to the war, as they already did in the First World War and in the Second World War.

“They came out of their crisis only thanks to the war in Europe. But there is a great danger: who guarantees that nuclear missiles will not fly? I do not guarantee this.”

Russian power provider RAO Nordic says it will suspend electricity deliveries to Finland from Saturday, citing problems with payments as tensions between the two nations rise. The Finnish grid operator said Russia provided only a small percentage of the country’s electricity and that it could be replaced by alternative sources.

Fingrid said it did not expect power outages as a result of the outage, as only about 10% of Finland’s electricity comes from Russia.

This crazy $ 500,000 motorhome has two bathrooms and a basement bedroom