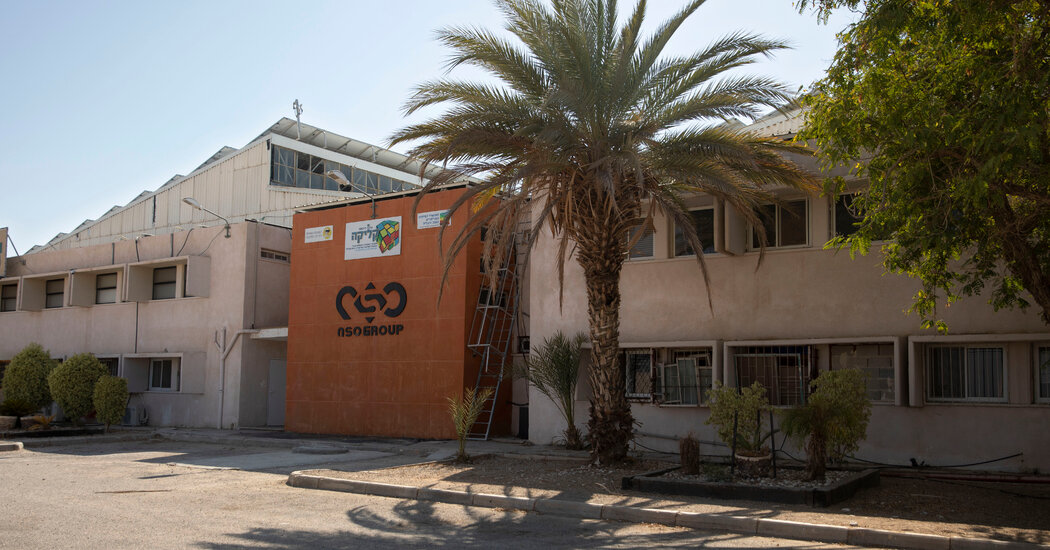 JERUSALEM – International hacking experts said on Monday that Palestinians belonging to human rights groups recently banned by Israel had been targeted by spyware made by Israeli technology company NSO Group. The accusations put the relationship between the Israeli government and the company, recently blacklisted The United States, under renewed scrutiny.

The findings were presented in an analysis conducted by Citizen lab, a cyber watchdog affiliated with the University of Toronto, and Frontline Defenders, a Dublin-based rights group, which found evidence of spyware during an evaluation of Palestinians’ phone data.

NSO has been criticized for years for selling its spyware program, Pegasus, to clients, including authoritarian governments who used the program to hack the phones of lawyers, dissidents, journalists, activists and politicians in dozens of countries.

Pegasus allows its users to remotely and secretly penetrate a phone, monitor its location, and extract content, including encrypted messages, videos, photos, and contacts. Past spyware targets have included people close to Jamal khashoggi, the Saudi dissident and columnist assassinated by Saudi agents in 2018; investigative journalists in Hungary; other lawyers in mexico.

Adam Shapiro, a spokesman for Front Line Defenders, said the investigation did not definitively prove or identify who deployed Pegasus in this case.

“But it raises a lot of questions about the role not only of the NSO but also of Israel,” he said. “There are a limited number of options that could be plausible here, and past actions by the Israeli government raise real questions about what is happening here and serious doubts about any denials the government makes.”

An NSO spokeswoman said the company did not say who used the software and that it did not know who the program was used against.

“Due to contractual and national security considerations, we cannot confirm or deny the identity of our government clients,” he said. The company was not aware of the details of the people monitored by its clients, he added.

The latest allegations, first reported by The Associated Press, mark the convergence of what had previously been two separate diplomatic issues for Israel: its outlawing last month of six Palestinian rights groups He accused of being a front for a banned militant group, which attracted widespread international criticism, and his long-standing support for NSO, which operates under state-issued licenses.

This policy, along with the allegations in the new analysis, raised questions about whether the Israeli government had used spyware against Palestinian rights defenders.

The analysis said that Pegasus had penetrated the phones of four employees of the outlawed groups, based on the analysis of your phone records. Palestinians suspected their phones had been hacked shortly before their organizations were outlawed last month and asked for help from Frontline Defenders, who worked with Citizen Lab to check their phones.

The Israeli prime minister’s office and the Israeli Defense Ministry denied that Pegasus had been used to hack into Palestinian phones.

The Biden administration imposed sanctions on NSO last week, adding it to a list of foreign companies that are prohibited from buying American products.

The suggestion that NSO software was used to target Palestinians adds a new dimension to Israel’s decision to ban the six Palestinian groups. Last month, the Israeli government claimed the organizations were fronts that raised funds for the banned militant group, the Popular Front for the Liberation of Palestine, which is considered a terrorist organization by the United States, the European Union and other countries.

The groups, which have been under Israeli investigation since earlier this year, collectively denied the Israeli allegations.

Citing secret evidence that has not been publicly disclosed, the Israeli Defense Ministry said the groups had received donations from European countries and institutions that were intended to be used for humanitarian and rights-related activities, and instead funneled that money to the Popular front. Officials said the designation of the six organizations was based on extensive additional intelligence, including classified information that was submitted to various intelligence services and law enforcement agencies in Europe and the United States.

Shin Bet, Israel’s internal security service, declined to answer questions about the content of this additional and classified information, or whether it was obtained with NSO spyware.

“Strong and unequivocal information was presented linking the activities of the relevant organizations with the Popular Front for the Liberation of Palestine,” said a Shin Bet spokesman.

A Shin Bet document from May summarizing part of that investigation, obtained and verified by The New York Times, did not provide conclusive evidence of a conspiracy between the groups and the Popular Front. However, an Israeli official said that this summary does not detail the main evidence against the six groups.

The Popular Front rose to prominence in the 1960s, when its members hijacked several airliners, and went on to claim responsibility for attacks during a Palestinian uprising in the 2000s, including the assassination of Rehavam Zeevi, to the Israeli cabinet minister. Israel, the United States and other countries designate it as a terrorist group.

Israel said members of the Popular Front controlled the finances of the six banned groups.

The six named groups were: Addameer; Al Haq; until; Defense for Children International-Palestine; the Union of Palestinian Women’s Committees; other the Union of Agrarian Labor Committees.

They say they are being aimed at silencing the legitimate work of Palestinian organizations to highlight rights violations by the Israeli and Palestinian authorities.

All six groups are involved in various ways in documenting Israel’s abuses; by the Palestinian Authority that governs the West Bank; and by Hamas, which rules Gaza. They also represent Palestinian prisoners in Israeli jails and promote the rights of children, women and farmers.

Some of the groups provided evidence to prosecutors at the International Criminal Court who are investigating Israeli politicians and military officials, including current Defense Minister Benny Gantz, for possible war crimes. They have often shared material and testimonies with major international rights groups, such as Amnesty International and Human Rights Watch, and have been frequently quoted in the international media. featured in The New York Times.

The document summarizing parts of the Shin Bet investigation into the Palestinian groups was originally provided by the intelligence agency to the groups’ European donors and to US officials in an attempt to persuade the latter of the legitimacy of their investigation. A version was first leaked last week to an Israeli media outlet, +972and an American partner, Interception.

But instead of detailing specific evidence against the six groups, the document focuses on allegations against a seventh organization, the Health Work Committee. It mainly contains complaints, obtained under Israeli questioning, by two former accountants from that seventh organization who were fired from their posts in 2019.

The two accountants claimed that the other outlawed organizations were controlled by members of the Popular Front, but on occasion admitted that some of those accusations were based on conjecture.

The governments of Ireland and the Netherlands have said that Israel has yet to provide credible evidence of links between the six groups and terrorism.

But an Israeli official said the purpose of the leaked dossier was to persuade Europeans and Americans of the guilt of the Health Work Committee, not the other six groups, and that more conclusive and secret evidence about the six organizations had been provided to American officials. in recent weeks.

“We reject the claim that the material presented to various US entities is circumstantial and unsatisfactory,” said a Shin Bet spokeswoman.

Patrick Kingsley reported from Jerusalem and Ronen Bergman from Tel Aviv. The reports were contributed by Gabby Sobelman and Myra Noveck.

Brabus partners with KTM for the first ever bike