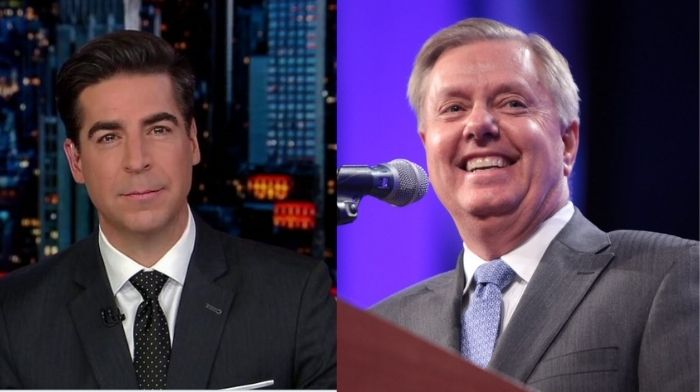 Watters scoffed at the latest example of this, a $40 billion aid package for Ukraine. The measure was expected to go ahead with support from both sides of the aisle until Sen. Rand Paul (R-KY) objected.

Lindsey Graham just said in @JesseBWatters Primetime that ‘if we can win in Ukraine’ excuse me @LindseyGrahamSC ‘WE’ are not fighting #Russia in #Ukraine. #LindseyGraham #Sit down
RINO NEEDS TO GO! 🤷‍♀️🤦‍♀️

RELATED: ‘Squad’ Member Cori Bush Wants To Know Why There Is No ‘Sperm Regulation Legislation’ For Men

Chew a lot of gum but don’t walk a lot

Watters wondered aloud why foreign aid sails through Congress but American problems are ignored: “We have a major baby formula crisis on our hands right now. Congress won’t even hold a hearing on it for a week, meanwhile illegals get formula. they are going to tell us that Congress can walk and chew gum at the same timebut all I see these days is chewing gum, but not much walking.”

And he wasted no time asking Graham why Americans were footing the Ukraine bill and receiving criticism on pressing issues here at home.

“Senator, you know how we feel about this. We want to help Ukraine, obviously. But it goes out the door, so almost everything is done for Ukraine, like this, like this. Billions out the door like East. And meanwhile, Americans are looking around like, ‘Hey, Congress, what about us?’”

At this point, Graham totally agreed with Watters saying, “I totally get it. Here’s the problem with Ukraine: they ran out of money to buy weapons, I think in the middle of May, so the Ukrainian army is beating up the Russian army. They’re about to run out of ammunition. They no longer ask for soldiers, they no longer ask us to seize the skies.”

Watters stopped him and replied, “I know, but we’re getting our asses kicked here, Senator. You know, come on. And we should have given them that weaponry a year ago when we saw the buildup coming.”

It was here that Graham began to meddle in the almost certain “yes” vote he will cast on any future Ukraine aid package. Graham was all in with Watters, but with a bit of a caveat.

“Amen,” Graham said. “Common sense tells you that Putin is not going to stop at Ukraine. Common sense tells you that he was going to invade. Well, the people running the border are also the ones trying to prevent Putin from entering Ukraine. If I thought that pulling the plug on Ukraine would make any problem here better, I would consider it, but our problems here are not made better by letting Putin win Ukraine because he will not stop.”

Hey, Senator, maybe you know someone in Congress, maybe a Senator, who could actually do that instead of pretending to agree with it on TV?

Why the hell did you have Lindsey Graham? She says what you want to hear, but she never really does anything to help.

Fortunately, for the collective American wallet, the only thing standing in the way of Chuck Schumer and Mitch McConnell’s desire to blindly steal the Treasury on behalf of foreigners is Senator Rand Paul (R-KY).

Pablo has Temporarily stopped the massive spending package that both Schumer and McConnell wanted to see pass Congress before a week-long recess. Paul wanted changes to the bill’s text that would include access to an Inspector General to oversee how funds are spent.

But ever professional, Jesse Watters ended his discussion with Senator Graham by saying, “We agree.” Watch the full interview here:

A new wave of republican crimes: manipulation of electoral equipment