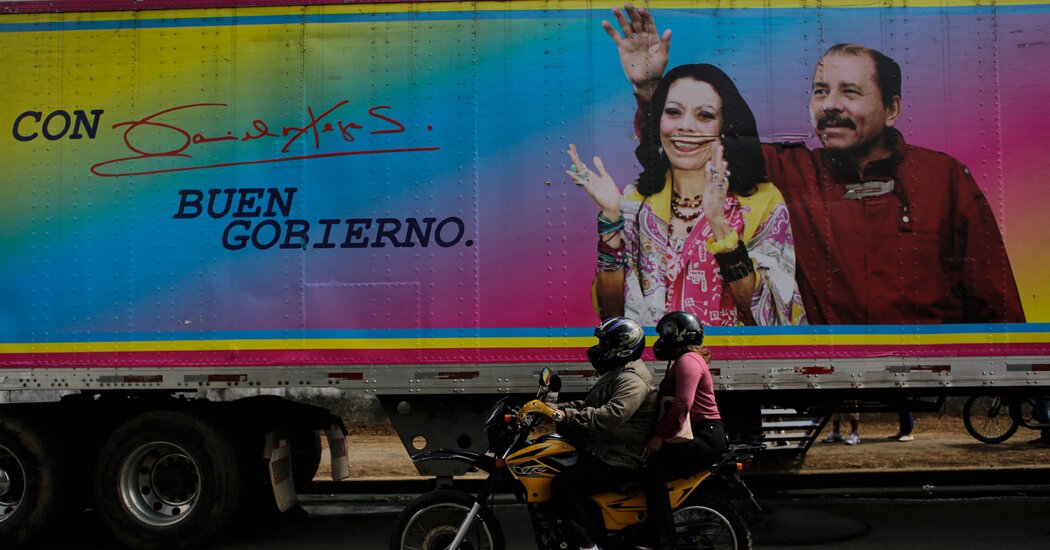 In his quest for a fourth consecutive term as the country’s president, Ortega detained all credible contenders who planned to run against him, shut down opposition parties, banned large campaign events, and shut down voting tables en masse.

The commission that monitors the elections has been entrusted to its loyalists, and there have been no public debates among the five remaining candidates in the race, all of whom are little-known members of parties aligned with Ortega’s Sandinista government.

“This is not an election, it is a sham,” said Berta Valle, wife of one of the opposition leaders who has been jailed. “Nobody will elect anybody, because the only candidate is Daniel Ortega.”

Ortega’s path to near-total control of Nicaragua has ushered in a new era of repression and terror in the country, marking a shift toward an openly dictatorial model that could set an example for other leaders in Latin America, analysts said. His claim to victory would be another blow to President Biden’s agenda in the region, where the administration has failed to stem an undemocratic slide and a mass exodus of desperate people to the United States.

A record number of Nicaraguans have been intercepted crossing the southwest border this year as thousands fled the country after Ortega began crushing his opposition. And more than 80,000 Nicaraguans live as refugees in neighboring Costa Rica.

“This is a turning point toward authoritarianism in the region,” said José Miguel Vivanco, director for the Americas region at Human Rights Watch, who called Ortega’s crackdown “a slow-motion horror movie.”

“He is not even trying to preserve some kind of facade of democratic government,” Vivanco said of the Nicaraguan leader. “He is in an open and blatant way, just deciding to treat the choice as a performance.”

In June, Ortega accused the opposition of trying to foment a coup. “We are not judging candidates,” he said of his critics who had been arrested. “We are trying the criminals who have threatened the country.”

Ortega first came to power after helping lead the revolution that toppled the Anastasio Somoza dictatorship in 1979. More than a decade later, he was toppled by Nicaraguan voters, in what was considered the country’s first democratic election.

That lesson about the risks of democratic rule seems to have shaped the rest of Ortega’s political life. He took office again in 2007 after a rival party accepted a legal reform that allowed a candidate to win an election with just 35 percent of the vote. He then spent years undermining the institutions that held together the country’s fragile democracy.

He made it clear that he would not tolerate dissent in 2018, when he sent police to violently quell anti-government protests, leading to hundreds of deaths and accusations by human rights groups of crimes against humanity.

But the sudden series of arrests that preceded the elections, which sent seven political candidates and more than 150 to jail, transformed the country into what many activists described as a police state, where even mild expressions of dissent are silenced by the fear.

A sports journalist was recently jailed for a series of posts critical of the government on Twitter and Facebook, under a new law that mandates up to five years in prison for anyone who says something that “endangers economic stability” or “public order. “.

After the arrests began, the United States imposed new sanctions on Nicaraguan officials and the Organization of American States condemned the government. This month, Congress passed a law calling for more punitive measures against Nicaragua. But that pressure hasn’t stopped Ortega from systematically removing any obstacles to his victory on Sunday.

A. recent survey showed that 78 percent of Nicaraguans view Ortega’s possible reelection as illegitimate and only 9 percent support the ruling party. Yet many refuse to question the government in public, fearing arrest or harassment by representatives of the Sandinista party who are stationed in all neighborhoods to monitor political activities.

The leader of an electoral watchdog group, Olga Valle, left the country after the Ortega government began attacking anyone who spoke out against her.

“There was a lot of fear to show your face,” Ms. Valle said. “There is a total restriction of freedoms, people have absolutely no capacity to meet, to organize.”

The first presidential candidate to be attacked was Cristiana Chamorro, Nicaragua’s most prominent opposition leader and daughter of the woman who toppled Ortega in 1990 after her first term in power.

Police officers placed Ms. Chamorro under house arrest on a Wednesday in June, a day after Secretary of State Antony Blinken commented on the importance of strengthening democracy next door in Costa Rica.

Félix Maradiaga, who also planned to run against Mr. Ortega, was sent to jail days later and remained there for months before his sister was allowed a 20-minute visit.

His wife, Berta Valle, who has been in exile in the United States since facing threats after the 2018 protests, said her husband had lost 45 pounds and that for months his only bathroom was a hole in his cell. He told his family that he is forced to remain completely silent, except when subjected to daily questioning. “It is psychological torture,” he said.

Maradiaga was allowed a meeting with his lawyer, surrounded by heavily armed guards, his wife added. That lawyer has fled the country ever since.

By August, the only opposition party left standing was Citizens for Freedom, a right-wing movement that some speculated would be allowed to run to at least give the impression of a fair fight. But then the electoral commission held a press conference in which it announced the closure of the party.

“I didn’t even finish watching it,” said Kitty Monterrey, the party’s president. “I took my passports and ran. I didn’t look back. “

He slipped away in the late afternoon, avoiding the police stationed out front. To get to Costa Rica, Ms. Monterrey trudged through rivers on foot and on horseback for 14 hours. He turned 71 on the day of his trip.

“This is not an electoral process at all,” Ms. Monterrey said. “Elections are when you have the right to choose, but everyone is in exile or in jail.”

There are no election observers in Nicaragua, only so-called “electoral companions,” a hodgepodge of officials brought in from countries like Spain, Argentina, and Chile, many of whom are members of their local communist parties. His job, a member of the electoral commission recently said, is not to “intervene” but rather to “observe” and “enjoy” the voting process.

Across the country, there is little sign that a contest for the country’s highest office is underway.

Gigantic images of Mr. Ortega and his wife, who is his vice president, hang over the streets. Vaccination sites reproduce revolutionary jingles with titles like “the commander stays.” Government buildings fly the flag of the Sandinista party alongside the Nicaraguan national flag.

But aside from a handful of flyers with opposition party logos in the capital Managua, there are no billboards or campaign posters featuring anyone else.

“Ortega’s mask was removed,” said Valle, wife of the jailed opposition leader. “He can no longer hide.”

Who is Oti Mabuse married to and what has he said about children?