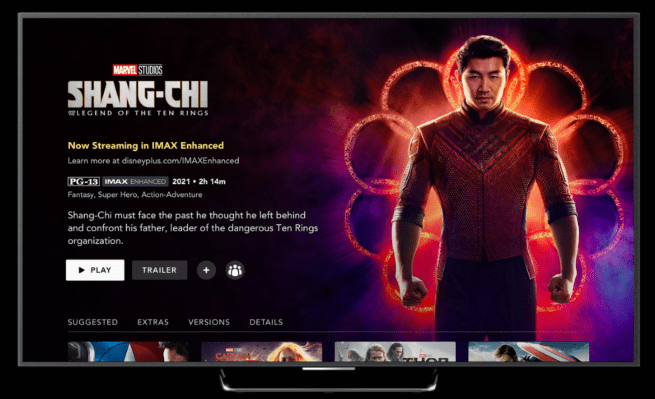 Disney + is bringing the expanded aspect ratio of IMAX in 13 Marvel movies on their platform on November 12. The new format means that viewers will see smaller black bars in certain scenes. The company says IMAX’s expanded aspect ratio is 1: 90: 1 and offers up to 26% more image for select footage. It’s also closer to the typical 16: 9 ratio of televisions.

The 13 films available at launch include the Disney + premiere of “Shang-Chi and The Legend of The Ten Rings,” as well as other MCU films such as “Iron Man,” “Guardians of the Galaxy,” “Guardians of the Galaxy Vol. 2 “,” Captain America: Civil War “,” Doctor Strange “,” Thor: Ragnarok “,” Black Panther “,” Avengers: Infinity War “,” Ant-Man and The Wasp “,” Captain Marvel ” , “Avengers: Endgame” and “Black Widow.”

Movies that are available to stream in the new format will feature a prominent label on their Disney + information screens. It’s worth noting that standard widescreen versions of the movies will continue to be available on the streaming service as well.

“We are delighted to create new value for Marvel fans and audiences on Disney +, and we look forward to offering even more enhanced IMAX features in the future,” said Disney + President Michael Paull at a declaration.

The new IMAX format gives Disney + an edge over its competitors, such as Netflix and Amazon Prime Video. The company says that in the future, this collaboration will bring more enhanced audio and visual technology to Disney +, including DTS’s signature immersive IMAX sound, which will likely compete with Dolby Atmos.

Susan Collins and Lisa Murkowski want people to know that they are the real victims of Roe v. wade being dumped

If you get this message from Apple, it means you have been hacked